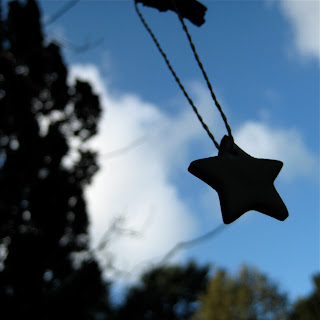 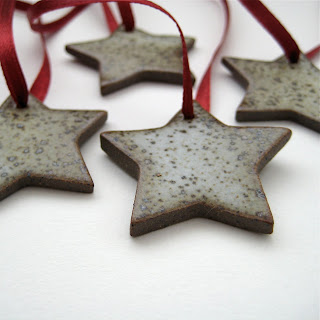 (Buy this set of stoneware stars here)
Making seasonal gift ideas in ceramics is a long term affair. You have to plan ahead otherwise time soon catches up with you. So this year I started making ceramic Christmas decorations back in the Summer. Normally I’m the type of person who really objects to Christmas decorations appearing anywhere and everywhere before December. But this year I feel strangely compelled to let my own little decorations loose into the world as soon as possible! So although December is still a week or so away, I thought I would blog a medley of photos of my handmade ceramic stars. 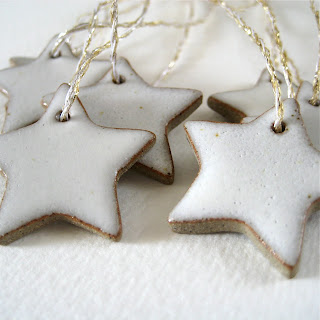 (Buy this set of ceramic stars here)
Each star has been handmade from stoneware clay and glazed on one side. The larger brown-fleck stars have been reduction fired in a gas kiln which has given them a lovely toasted appearance. The smaller white stars are fired in an electric kiln and glazed in a plain white glaze.

Finding the right details to finish off your creations is not always easy. I’ve strung the brown-fleck stars on a festive red ribbon with a simple bow which I think sets them off beautifully and has a rich warm quality. I wanted a more delicate, sparkly type of thread for the smaller white stars but finding the right one proved difficult. I made several disappointing trips to my local sewing shops in search of just the right texture and quality – but found nothing that fitted the bill. Then I suddenly remembered making cords out of strands of wool when I was a kid and realized I should make my own hand-twisted thread.

And here’s how I made it: 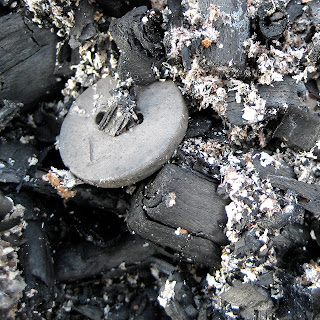 It’s been over a week already since Bonfire Night. When it isn’t pouring with rain or blowing a gale (like it is today) we usually mark November the fifth with a little bonfire in our back garden. Out come the sparklers, some bowls of hot stew and a bottle of wine.

I also decided it would be a good idea to put a couple of pieces of bisque ware and green ware straight into the fire. Like a pit firing. No glaze of course – just straight into the red embers with a pair of tongs at the end of the evening and left to keep cooking overnight. These were just small things like buttons which I half expected to never find again. However, a day or so later (it rained the next day) I found this little button (pictured above) peeking out of the ashes along with four other pieces that survived intact.