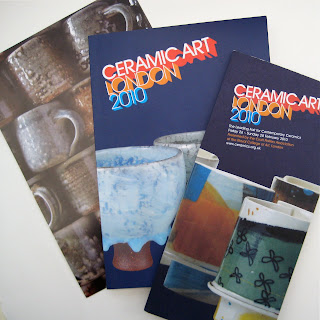 I took a spontaneous day trip to London on Friday to see this year’s Ceramic Art London show at the Royal College of Art. Last time I went to the show was back in 2008, which was the first year I’d heard of it. I suspect not many more people have heard of it either or since! It seems only the die-hard ceramic fans know about it; either through word-of-mouth or through quarter-page advertisements in Ceramic Review. So a select group then (…) Part of me thinks it’s a shame that it isn’t a massive event with loads of publicity. Pots pots pots! Come and look at lovely pots! But another part enjoys the fact that you can wander around the stands without feeling crushed or under pressure and instead properly SEE stuff.

For a London show it's a good, manageable event, size wise: this year I counted 77 stands around the floor plan, so it doesn’t feel like a never-ending chore of stand-after-stand. Instead you can do several in-depth circuits and have a good look at everything. And perhaps because it’s attached to the college (or perhaps because it’s full of potters) it doesn’t feel like it’s only about The Sell either. Some Art/Craft shows held in London do feel a bit like this: Origin for instance (currently held in Somerset House in autumn) is a lovely show, but has the air of being a showcase for selling only. Ceramic Art London on the other hand is like a secret club of ceramic makers, experts, collectors and pure fanatics: not only can you buy the most gorgeous stuff from some of the biggest names in British contemporary ceramics, but you can also ask them questions. Or at least, that’s what I did! So I came away with some wonderful tips and suggestions from several makers (especially from the lovely David Frith - no less!) all of whom were very happy to share and not in the least bit possessive or precious about their ‘methods’.

Downstairs at the show is the self-service canteen which during normal college hours serves the students as cafeteria. And just before the canteen is the make-shift ceramic bookshop full of lovely books on ceramics. I was tempted by at least three books but eventually resisted (owing to lack of funds). This year though they also had a small display of pottery tools for sale: so I treated myself to a nice new slip trailer and an extra long sponge-on-a-stick (these being more immediately useful than a £30 book!) And finally I bought myself a mug from Lisa Hammond’s stand as a little personal treat – it was only £16, gorgeous and (again) immediately practical of course.

And that was Friday. A very nice day out! Lots of inspiration, ideas and tips - and also a new ‘wish list’ of books which I thought I’d make links to from here, for future reference…

And you can visit the Ceramic Art London site here: 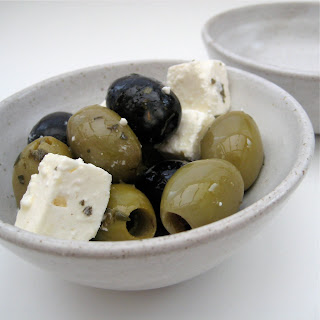 A photo shoot with food? Brilliant idea. Sometimes taking photos of pots can feel a little repetitive. Line up the shot, clickerty click, upload the pics and then move on to the next one. Big yawn, achy back. But once you add food into the mix the whole experience changes. I certainly enjoyed this photo shoot, especially since I got to eat the olives at the end.

Sometimes styling a shot with food makes all the difference. This little bowl was just asking for some food in shot. The photos of these bowls on their own are OK but feel a bit bland and certainly don’t do them full justice. Because they’re glazed in plain white (a difficult colour to photograph) they’re in danger of being undervalued and overlooked - when in fact they’re hugely versatile, gorgeous little things that fit snugly in the palm of your hand! I want to call them sugar bowls but know they’re also dip bowls, snack bowls, olive bowls – even finger bowls! But I decided a selection of olives and cheese might best illustrate their potential because these will provide a lovely colour group: black, green and white. The olives also give a hint of scale at a glance which I think a bowl on its own - or even with sugar or dips - might not get across.

So hopefully the photo above suggests lots of things simultaneously – function, versatility, scale and also ‘lush yummy must-haveness’. The thing to remember though (I discovered) is to make sure you’re still taking pictures of BOWLS. I ended up with far too many close-up shots fixating on glistening olives, while the bowl rim itself was completely out of focus! Perhaps I should’ve had my lunch beforehand…

Anyway, as always you can buy these bowls in my folksy shop. 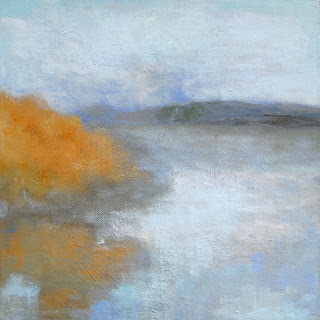 I’ve been painting all day today in my studio. Above is a photo of my day's work. Not really a ‘finished’ piece of course but a sketch or study I suppose - just to get the ideas going. It’s been a while since I painted anything so I’m a bit rusty - although after about ten minutes I was totally absorbed and almost forgot to have lunch.

I’ve used acrylics on a small 10 x 10 inch canvas, mixing the paints with just a smidge of water now and then if the paint gets too sticky or dry. A limited palette of just nine colours; the main ones being: -

It’s a view made entirely from memory of the River Medina which I was cycling alongside one day last week in the late afternoon. Of course it isn’t a view of any specific point, but a general ‘mood’ I was trying to capture, particularly the colours at the end of a clear winter’s day about twenty minutes before twilight. 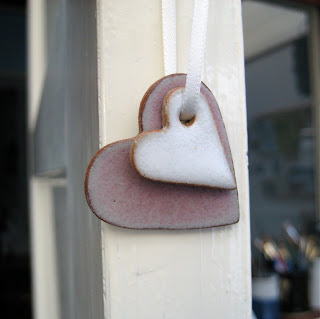 (buy these little ceramic hearts here)
I've been photographing these little ceramic hearts in the past couple of days. Here's one hanging up on the edge of the door in my studio. I started making these back in September but somehow things conspired to get in the way of me listing them in my shop until now. So I've been making a mad dash to get them ready before Valentine's Day next weekend. I'm hoping though - since they're so pretty - they'll be the sort of thing that people might like any time of year and for all purposes: not just as little love tokens but as gift tags on special presents, for accessorizing, for crafts - or just for hanging up on a door and looking pretty!
I'm also in the process of re-organizing my Folksy shop at the moment: doing a bit of spring cleaning and changing stock around. I recently sold some items 'off-line' to a lovely local buyer who came to my studio and I also gave a large consignment of stock to a local arts and crafts gallery/shop. So it's been quite a hectic and exciting beginning of the year already - but my poor shop has suffered for it. I hope to add more items soon though.
Anyway, just a quick catch-up today...
Posted by Jude Allman at 19:40 4 comments: