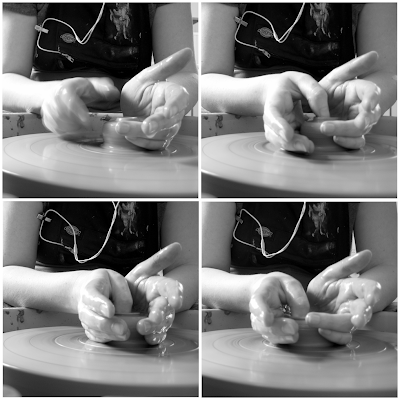 I’ve been trying out some new ideas in the past week or so. I started off throwing a series of low, shallow pots which you can see drying in the picture below. I suppose they’re low cylinders really: a very simple design thrown straight across at the base and then straight up at the sides. These are quite small, made in stoneware using about 175g of clay. I have a plan for these which I won’t reveal at the moment because I want to see how they turn out first! But it’s part of a new series of functional ware I want to experiment with over the next few months. 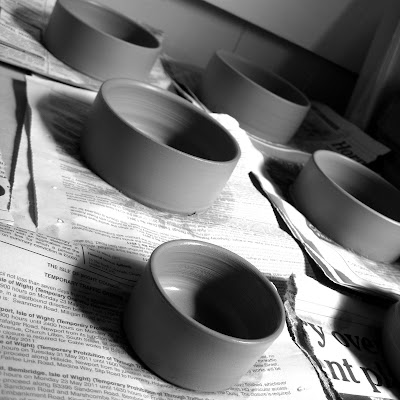 As I was throwing them I had an idea I’d take some photos of me throwing ‘in action’. The composite picture at the top of this post is the result. You can see how small the balls of clay were. And it’s not easy taking a photo using a timer whilst trying to concentrate! Luckily the camera only got a little bit smudged with clay – I was more worried about knocking it into the drip tray! And luckily I think the photos came out OK too. I tried to show in sequence the ‘opening out’ phase of throwing a pot which widens the base (the stage that comes after putting the hole in the centre of the clay). But it all depended on when the timer went off! I’m not even sure if that pot survived now – I might have been too distracted by photos…

Leach: A Book and a Pot 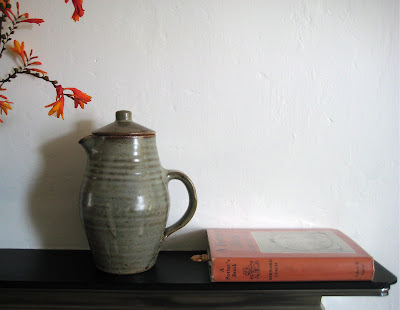 It’s always worth having a look on Ebay in case there’s a bargain to be had. A couple of weeks ago I was browsing in their books department when I found a copy of Bernard Leach’s A Potter’s Book. I knew this was a classic in terms of ceramics: a title on the list of ‘books-to-read-one-day’. So I decided I might as well make a bid (especially since it was only six quid) and a couple of hours later an email told me I’d won! 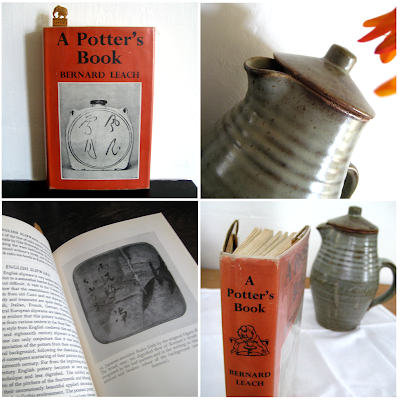 I’m really chuffed with my copy. It’s a 1965 hardback edition with dust jacket, in good condition and complete with a musty old book smell that all the best books should have. It’s a really nice size too - so many pottery books are huge, heavy things with sharp corners, which make them uncomfortable and exhausting to read. I’ve only just started to read this one however (a couple of pages in) but flicking through I can tell there’s plenty of information and ideas to absorb. I’m particularly interested in the chapter on Decoration because this is an area I want to develop in my own work. And since Leach was such a master of brushwork, I’m hoping I can gain some ideas and technical tips. (If you don’t know who Leach was by the way, here’s a wiki bio.) 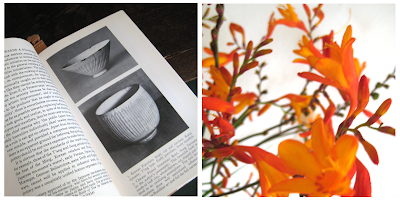 On the subject of Leach, I thought I’d also mention a St Ives Pottery piece IC bought back in May this year. We found it in the same local second-hand warehouse place I bought my little rush pottery stool from (blogged here). IC spotted the pot first and called dibs before I could get a chance! Straight away I knew it was a ‘proper pot’ because I’d seen one exactly like it in the V&A in their Ceramics Gallery. But we didn’t realise until we got it home and checked the seal that it’s a St Ives piece. After some research we established it to be a standard ware coffee pot, possibly 1950’s/60’s. It has a lovely green glaze that breaks away at the rim and which I think might be a type of wood ash. And although it’s a lovely pot and we only paid £12 for it, (well, IC paid £12…) it does have a hairline crack running down the side – which I only noticed when we got it home. We were really disappointed by this (!) mainly because it means we can’t use it: and pots like this are even better if they're used… 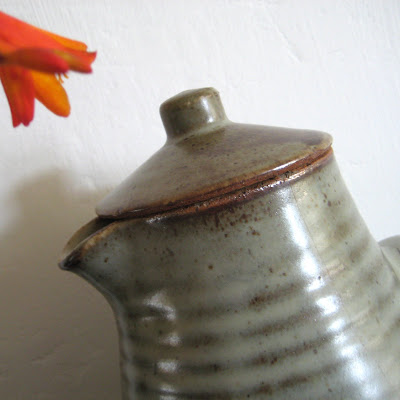 Anyway, I’m really pleased to have an example of St Ives Pottery in the house because you can learn so much from handling them: weight, dimensions, detail – even following the throwing rings with your hands helps an understanding. In the blurred photo below (which I took at the V&A during my last visit blogged here) you can see the same style pot packed in with other St Ives pieces. Much as I love the V&A, all their lovely pots are - in some ways - inaccessible; locked behind glass unused and unhandled. If only they’d let me have a few of them to take home! 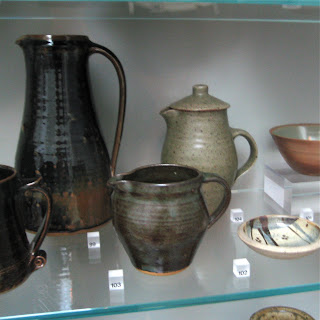 Open Studios: after the show... 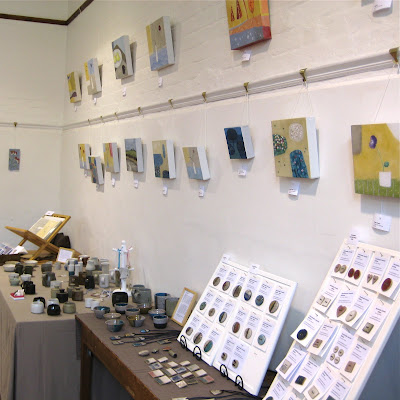 I’ve just had a very successful Open Studios held in the Art Gallery at Quarr Abbey near Binstead on the Isle of Wight. It was a really good week: luckily the weather wasn’t too extreme in either direction, which meant the Abbey attracted lots of people. Over the six days we counted 1001 people through the door! We were so pleased with the response: and luckily some of them were happy to spend their money too!

I shared the venue with four other artist/craft makers including my sister Sue. Last year my sister and I shared a stand at Freshwater Parish Hall as Osmosis (blogged here). But this year we wanted to showcase our work separately: so I had my ceramics and paintings on display, and my sister had her knitting, weaving and spinning wheel on show for demonstrating. 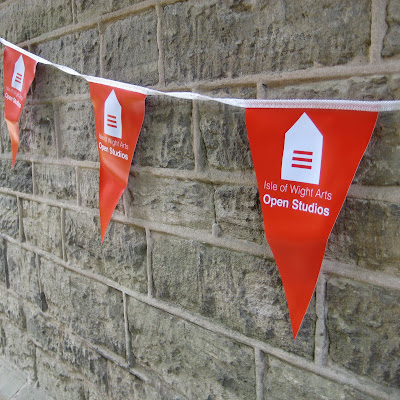 The Abbey is a lovely place to visit - which I think I mentioned before when I blogged about our November show last year (here). What I really like about the Abbey as a venue is how the simple, rustic style of the buildings and grounds seem to suit my own style of ceramics. I think having a venue that sets the right tone really helps people appreciate the work better. But I was also pleased with how my display stand went this year too. 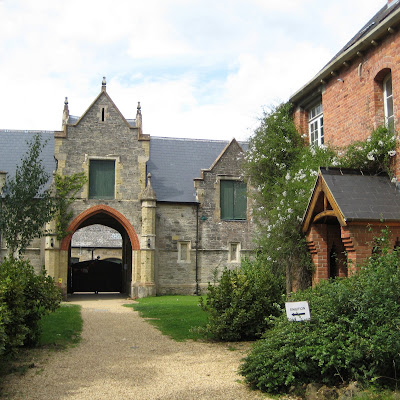 This year (unlike last year's Open Studios) I was able to show my paintings too. In fact this was possibly my first show where all the elements of my stand could be displayed as planned! I’ve been to many shows where (on the day) the stand isn’t quite what I thought it was going to be (sometimes nothing like!) and I’ve had to improvise a display or sacrifice pieces of work. This is always frustrating – but amazingly it all fitted this time! I had a big wall space to hang my paintings from and below these I had three tables in a line to show my ceramics. I even had space to show some mixed media originals from my portfolio, which is something I’ve wanted to do for ages… 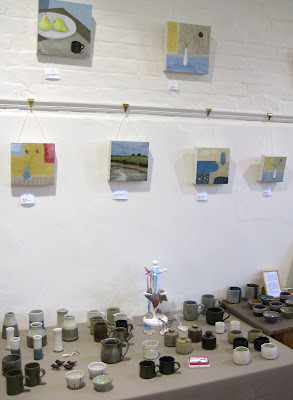 In the end we all had a very good Open Studios – and most of us will be back at Quarr Abbey again in November for a Christmas Crafts show. In the meantime though I still haven’t unpacked everything, so there are boxes everywhere!