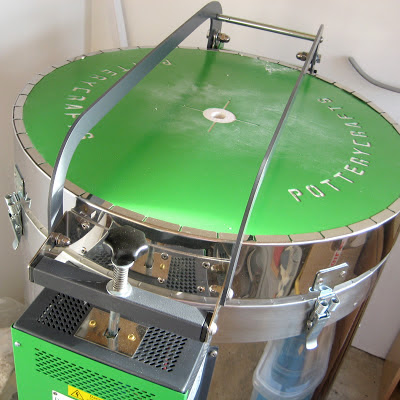 It’s been a busy month – and it’s not over yet! I’ve been up to my ears in Christmas shows. In fact my next show starts later tonight at 6pm. I’ve got everything packed ready and soon I’ll have to leave to set up my stand. But since I’ve got a few minutes to spare before I go, I thought I’d quickly blog about my extra special news…

As you can see in the photo above, I’ve had a lovely new kiln delivered! It actually arrived weeks ago – at the beginning of November – but I’ve had so much to organise with all the shows I’ve been doing I haven’t had any time to blog it or even unwrap it properly. I’ve been walking past it in the studio carrying boxes of pots backwards and forwards, but I haven’t had any time to play around with it. Most frustrating! 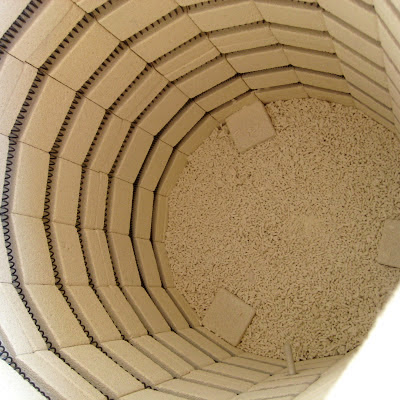 It’s a toploading electric kiln, single phase, 40 amp and as you can see from the photo, bright green! It still needs to be wired directly into the plug, which means I have to wait a bit longer… And it’s actually bigger than I expected. When it was being unloaded off the back of the lorry there was a moment when I thought it wasn’t going to fit through the front door. And when we got it off the pallet and to the bottom of the front steps, then it really became obvious it wasn’t going to fit through the front door. Not only was it impossibly heavy for two people to lift (there was nothing to hold onto and frankly the steps defeated us) but also, despite all my careful measurements, I hadn’t accounted for the door handle…there’s a lesson there. 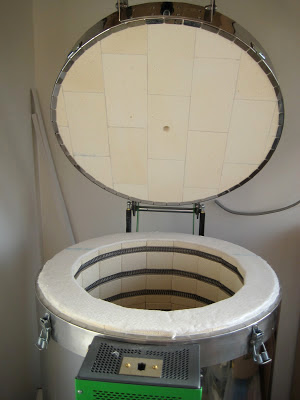 However, we managed eventually to wheel it into the studio via a long circumambulatory route (luckily it was already fitted with casters) and we even had daylight to spare! We pushed it into the corner of the studio and went into town to celebrate with a couple of well-deserved lattes. And since then my poor new kiln has been sitting waiting exactly where we left it.

Anyway, I have to go now to set up a show! Hopefully next month the kiln will be plugged in and ready to go.

Yet again I’ve got building work going on today (!) and since I can’t make any pots I thought I’d do a quick blog update. I’ve been meaning to blog this for ages in fact, but got distracted. Back in August (in the middle of summer!) I was making a couple of side plates on the theme of ‘Winter’. You might remember the post. This was for a promotional photo idea for an Etsy team which I’m a member of, called the UK Clay Users or UCU for short. The idea was to design and make plates that could be arranged as a wintery themed wall display.

As you can see in the photo above the collection of plates look really good together – we all seemed to colour coordinate! And the winter theme really does show through in the display. The photo and the idea itself is all thanks to Jude Winnal of VanillaKiln on Etsy – a big thanks Jude for all your hard work! And all our plates were made available for sale in our Etsy shops: mine is still available here, along with a smaller sister plate with a different decoration. To find out more about each individual plate and shop links, here’s a link to the UCU blog post. UCU is also now on Pinterest too.