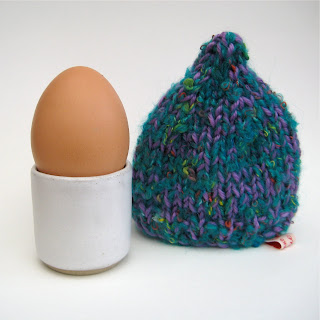 Since Easter is on its way I thought I’d blog about these little egg cups and egg cosies pictured above. They are available to buy in Osmosis, a homeware gift shop on Folksy which I run jointly with my sister Sue Wright.

The egg cups are handthrown by me and glazed in a simple white gloss glaze. The glaze is food safe and matches other tableware items I make in the same glaze. My sister Sue has handknitted these lovely little egg cosies to match. The cosies are currently available in two colours using a wool with a fleck pattern. The first is a rich purple-and-jade cosy (pictured above) and the other is a ‘Spring’ mix of yellow and green. The egg cups and cosies can be purchased as a gift set from our shop and are perfect for Easter - or for breakfast all year round!

We hope to add more homeware gift items to our Osmosis shop soon so please do check back. You can visit our shop here.

Tree Motif: from Paint to Plaque 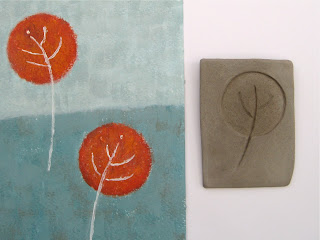 (Tree motif in acrylics and translated into clay plaque.)
Mad as a March hare; that’s what it’s been like these past two weeks. March always seems full of birthdays (including my own) which is partly why it’s been a while since I’ve blogged. But in between opening presents or sending them in the post I’ve managed to make quite a few pots.

Since making my teapot I’ve made 4 jars with lids, 4 mugs, 4 salt and pepper bowls, 4 small jugs, 4 large jugs, 2 napkin rings, 2 coasters, 1 incense burner, countless buttons and a small plaque. Some of these are part of an order but the plaque was something I stumbled across when I had a bit of clay left over at the end of the day. Usually I try to use all the clay I’ve prepared during a making session and create a least something however tiny or odd rather than just chucking the leftovers in the reclaim bucket. So I was on the point of making some buttons out of it when instead I decided to do some ‘doodling’.

As is usually the case with these things, I had a huge amount of fun scratching away at the leatherhard clay trying out little designs and re-working them until I finally decided on the ‘tree’ design shown in the photo above. The plaque is only small – not much bigger than a credit card size and deliberately uneven around the edges; in fact it retains the same shape and size of the original piece of clay left over - except for some smoothing. It’s made from stoneware and on the reverse I added a small lug so a piece of wire or twine can be threaded through the hole in the back for hanging.

The design itself is a motif I’ve used before in some of my paintings: and a detail of one example can be seen on the left in the photo above. This painting was from a series of designs inspired by autumn colour – hence the lovely intense orange. It’s a mixed media painting on watercolour grade paper using acrylics and pastels. It’s more of a reference piece rather than a finished work - but the design translates to clay extremely well I think. Of course my next dilemma is how to glaze this piece. Unlike the painting – where the motif and colour are one and the same – I now have to decide whether to glaze in one single colour, letting the motif show through, or follow the motif with coloured glazes. Decisions, decisions. 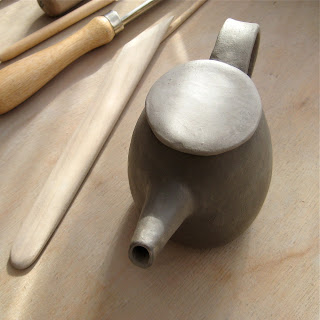 An unexpected burst of inspiration occurred a couple of days ago and I decided to make a little teapot. The unusual thing about it (from my point of view) is that it’s hand-built rather than thrown. I don’t usually hand-build unless the items are too tiny or complicated to throw on a wheel. So this little teapot came as a bit of a surprise.

I started off with a small lump of stoneware and began making a shallow pinch pot in the palm of my hand. Once I had my base, I started adding height using thin, even coils. Then my natural impatience kicked in and I decided to roll out a couple of chunky slabs about an inch or two ‘high’ and build up the wall. These were completely random shapes (like you get if you roll out a ball of clay with a rolling pin) but I jig-sawed these together quickly and discovered that the unevenness gave me all kinds of ideas for the form – which was just as well, since I started with no idea about what the teapot was going to look like. So the little pot seemed to grow all by itself.

Once I had the body roughly made, I rolled out a small slab and cut a rough circle for a lid. I made a flattened coil and curled this into a smaller circle and attached it to the lid to act as a small flange, which should help keep the lid in place once fitted on the teapot. A random triangular slab curled into a cone-like tube was all I used for the spout, and I cut just one hole into the body of the pot for pouring. (I’ve yet to see how successful one hole is compared to the usual ‘strainer’ design.)

And at first that was supposed to be the finish. I had an idea that because the teapot was so tiny it could be a ‘tip’ teapot which you gripped just with your hand to pour. But after thinking about it I decided it wouldn’t look balanced - so I tried two different handle designs. The first was a ‘pulled’ handle with a nice, smooth shape - but the style of it seemed to conflict with the ‘hand-built’ feeling. So in the end I made a flattened coil and attached this which seemed to match the mood of the thing much better.

Anyway, after a bit of cleaning up, this little teapot was finished. Totally unexpected – but I’m pleased with the result. And it’s given me lots of new ideas too which I’m looking forward to playing about with. Obviously it pays to try something you don’t normally do now and then!