Setting Up the New Studio

It's been a busy few months setting up the new studio. In fact so much has been happening I'm not sure where to begin blogging about it! I also didn't document the process - or progress - very well, so I don't have many photos. But here's the short version of everything that's been happening.

I began setting up the studio in January. The most important thing was getting a new space for the kiln. My poor kiln was stored in the garden shed for three months wrapped in bubblewrap and tarpaulin to keep him warm and dry. Luckily the winter wasn't harsh, so in January a new kiln room could be built ready for the electrics to be installed. The Electrician was booked for the 15th of Feb, which meant Valentine's Day (the day before!) was spent preparing the new space and moving the kiln into situ.

By the way, I don't recommend spending Valentine's Day with just two of you trying to move a 17 stone kiln out of one shed into another over soft mud using improvised duckboards on a steep gradient! Luckily there was only one injury - me. I crushed the palm of my hand between the kiln and the door frame, leaving a lovely big bruise for a week. But at least the kiln was installed safe and sound!


Anyway, the kiln room is now officially up and running with some shelves/ware boards (or at least brackets for future shelves!). I also treated my kiln batts to a good clean and a fresh coat of batt wash (pictured drying out below) which I usually do once a year at the start of the new year.


In the meantime I also made some pots of course. After being featured in Landscape Magazine, most of the pots I decided to make were custom order pouring bowl sets - as well as a few staple pots like modern pourers. This was ideal really, not only because it meant the kiln was earning its keep, but (as the forms are so well known to me) it also made it easier to get back into the flow of throwing after a break over Christmas.

In fact, it was a good idea all round to stick to familiar pots I knew how to make and I'd recommend it for a first firing in a new studio. It meant I could quickly plan how to pack the bisque kiln (which pots go where) as I've done it so many times before. It also helped with glazing too. Apart from one big bowl which I glazed in Aqua, I chose to make pots using just my white glaze so I only had to prepare two tubs - there's nothing worse than returning to an old glaze that's been quietly solidifying into an impossible cake at the bottom for three months! Also, the last thing I wanted to do was 'creative glazing' when I didn't even know if the kiln would work. So instead, I tried to keep things as simple and practical as possible.


As for the rest of the studio, things are still 'ad hoc'. It's a work in progress. Things are currently 'in a place', but not necessarily in the ideal place. It's actually quite disorientating working in a new space - even when making familiar pots. Nothing is quite where you thought to remember to put it - if you get my meaning! I'd sit myself down at the wheel thinking I was ready to start when I'd realise I'd forgotten to get something basic - like water. Oh well, I'm sure it will all slot in to place eventually. But at the moment there is still so much to plan and do...

By the end of March I fired the kiln for its first bisque and also its first glaze! I'm delighted to report that everything went perfectly! The bisque was perfect, the glazing all went well and the glaze firing was perfect too. It was such a relief. It had been on my mind for about a year since deciding to move house - worrying if the kiln would be OK...

Here's a few photos of the pots that came out - my first pots in my new studio. 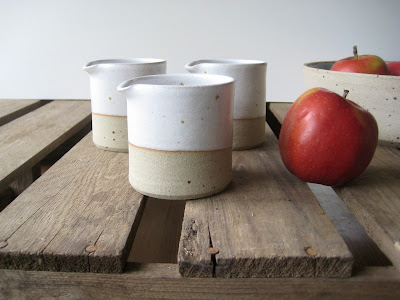 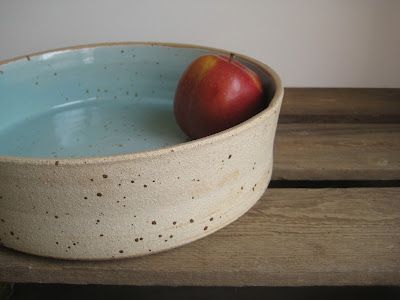 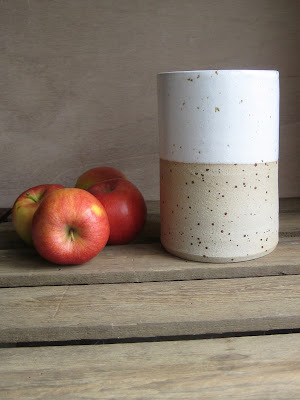 Since then I've bought some new bags of clay and I'm ready to make more pots and fire more kilns! (Fingers crossed!)